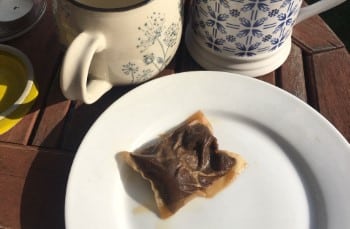 Casually dunking a tea bag and then tossing it away after a single use has been the usual way that tea bags are used.

But do you wonder if when throwing the tea bag – can tea bags be reused? Indeed, if they should be reused at all.

Perhaps … when it’s the last teabag left in the pantry and you don’t have time to get a refill from the store? well, maybe!

This article will give you a thorough understanding of the question of can tea bags be reused, all those other teabag reuse questions, and more. But first, a quick answer to give you the top-level information

Can tea bags be reused? Teabags shouldn’t be used a maximum of two times within any 24 hours before discarding. You can reuse tea bags more if kept in a safe and healthy condition. This maximum number of times helps make ensures safety first and maintains a reasonable taste.

That’s what they say, but my preferences are slightly different from this. More on that shortly.

The steeping time for each reuse comes with gauging the color you can see – and a little bit of tasting. You might also need to try and forget that the tea bag is a “second-hand” tea bag!

In general, it would take a maximum of 8 minutes steeping for the first reuse and a maximum of 12 minutes for the second reuse – the longer, the stronger. Unless you’re using more instant tannin store-bought boxed tea bags of course.

Naturally, if you steep for longer in the first reuse, then the second reuse won’t offer up as much flavor as the first steep.

But of course, you can experiment with this to get your own personal taste preferences.

For me, the best time to reuse a tea bag is straight after the first use. These circumstances come around from time to time, particularly if you’re making tea for two.

Tea bags these days provide a strong and fast yield, so often can serve two at one sitting, either in a pot or in cups.

If you don’t use them straight after for the second reuse, then I’d only ever use them before the tea bag begins to dry out. Perhaps for that second cup straight afterward?

I mean, the 24 hours rule might work for you, but if you’ve seen a tea bag that is a day old then the prospect of reusing it to save a few cents just isn’t worth it.

So I carried out a very crude but interesting experiment to test out what tea bags were like when left within the 24-hour period.

Here’s a tea bag straight after the first steep. Looks good to use again…

Here’s a tea bag left out for a full 24 hours after the first steep. Not quite as appetizing. Dry and looking quite old.

So some common sense is needed.

And here’s a tea bag that’s been stored in a container in the refrigerator for 24 hours after first use.

A little better, but I’d still be inclined to dispose of it.

These rules do differ for reusing loose leaf tea though. So we’re assuming here that you’re re-using tea bags and not tea leaves.

Tea bags usually have a longer manufacturing process, and are designed with greater surface area to release tannins much quicker – this makes a big difference.

Fair to say that these maximum recommended times (24 hours) and the time between the reuse of teabags also depend on the type and coarseness of the tea, its oxidation levels …and based on whether they’re roasted or unroasted. As well as where you keep the tea bag in between steeps.

There are just so many varieties of tea out there that the combinations are almost endless!

But it’s largely down to health and safety concerns that people put a cap on the maximum number of times and the time between uses.

That brings us to the question is it safe to reuse teabags?

Can tea bags be reused – is it safe?

In general, it’s safe to use tea bags as long as they’ve been stored correctly and are met with common-sense health conditions.

But the sensitivity of tea bags to turn unhealthy after their first use tends to be quite high. This is why many don’t recommend reusing tea bags as a healthy or safe option.

So if you want to reuse tea bags for personal purposes, then it’s recommended you stick to a maximum of two times of reusing the tea bag and discard it within one day after the first steep.

However, if you want to reuse the tea bag for economic purposes, in a tea room for example, or if you can’t get hold of a refill, then it’s important to know the right conditions to store and keep tea.

Let’s dive a bit further into what happens when tea bags are left between reuse.

What happens when tea bags are left between reuse

So assuming the water was not boiling when you poured it over the tea bag, then that may not be enough to kill bacteria on the teabag itself.

All bacteria need to grow is the presence of water. So the chances are that bacteria can build in the next few hours of interval.

This means that the next reuse of teabags can potentially be dangerous. Alongside this, if you steep the first-steep tea bag in just lukewarm water and then leave it out for a few hours – until the next reuse, then it’s not going to be that safe.

This is because the luke-warm temperature is near-perfect for bacteria to grow and multiply.

In general, tea leaves are not pasteurized during processing and so they could carry viable non-harmful bacteria and/or bacteria spores.

Some also believe that even if you soak the first-steep tea bag in very hot water, it sometimes may not be hot enough to kill all the bacterial spores anyway.

So some people use a pressure cooker to give a good hot soak for the first use, this would help kill just about all the bacteria.

Storing tea bags for a second use

You could simply refrigerate the tea bag after the first use if you’re sure the first use gave the teabag a hot soaking enough to kill 99% of the bacteria.

If you don’t have a refrigerator, you can keep the tea bag in some moist medium such as a kitchen towel, and a cool place.

An alternative is to keep the teabag in something like a shot glass of water until the next use.

The more the tea bag becomes dried out after the first use, the more chance for it to grow mold or bacteria and turn unsafe for reuse.

The reason for refrigerating is simply because, like most beverage products, the low temperature will dramatically slow the growth of bacteria. This will protect the tea bags and keep them under safe conditions for reuse.

In other words, any plant material, moisture (after the first use of the teabag), and heat or room temperature, are three supporting elements for easy bacterial growth.

Of course, after all these measures have been taken, if you’re still unsure about whether or not they’ve got bacteria or mold, you can always smell the teabag. If it gives out a funky smell, which most mold and bacteria do, then trash it immediately.

Now that we’ve covered the health concepts and safety areas, it’s fair to ask about the taste profile when reusing teabags.

Let’s sum this up next.

If you’re a tea-head or even a caffeine addict, then reusing teabags will probably give you a disappointing flavor. The same goes for most people. Perhaps if you mixed it in a pot with other fresh tea bags then you can probably get away with it!

Reusing tea bags are unlikely to give out a strong tea flavor either, or the kick of caffeine as they did in the first use/brew.

But, some say this can also vary depending on how long you steeped the tea bag for in the first place.

If you steeped the tea bag for a lesser time in the first steep, then the reuse can offer up a good strong enough flavor – possibly similar to that of the first brew.

However, the taste profile in the second reuse will probably be somewhat off …and it may be good for a desperate tea addict who’s been denied for some time!

Some say reusing tea bags work best for milk teas as it won’t use up as much tea as black tea. Then again it probably won’t make much of a strong milk tea either.

If you reuse tea bags for business use, then it’s probably best to switch to loose tea leaves anyway.

I like tea very much, but the prospect of using a tea bag for a second time – sometime later – fills me with dread! And all in the name of saving a couple of cents?

Sure, use tea bags a second time, anything to stop being wasteful, but reuse it very soon after and you’ll be fine. And you guessed it … I threw the experimental tea bags away!

5 Replies to “Can Tea Bags Be Reused? How Many Times? Is It Safe? Examples”