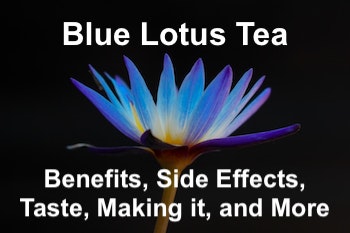 Having researched and written about both blue tea, which is very similar, and Lotus leaf tea in general. I think I’m pretty well placed to discuss blue lotus tea.

So in this article, I’m going over the whole subject of blue lotus tea and answering lots of burning questions. Let’s start with what blue lotus tea is, and then we’ll get into more detail…

What is blue lotus tea?

Blue Lotus tea is a fragrant and mildly intoxicating beverage derived from the blue lily flower (Nelumbo nucifera) is an endangered plant, historically used for many herbal remedies and as an aphrodisiac. It is claimed to benefit sleep, anxiety, and erectile dysfunction.

Also, I should note here that there is a difference between the blue lotus plant and the blue water lily. So be sure not to confuse the two as is commonly done. And be aware that common nomenclature does change depending on which region you’re in.

You can also explore my similar articles on Blue Tea (butterfly pea tea) which is seen as a major weight loss tea. Or check out my general article on Lotus Leaf tea caffeine taste and more.

You might also want to explore the topic of herbal tea in general, if so then check my article on what herbal teas are good for.

Anyway, let’s go on to the benefits of blue lotus tea …as there are some particular uses this tea has.

There are more claims and anecdotal evidence supporting blue lotus tea than hard research. It has been historically used for recreational and medicinal purposes. As well as a natural aphrodisiac, the benefits are believed to include reducing anxiety, improving sleep, and aiding erectile dysfunction.

It has been linked with various medicinal purposes across various practices of medicine including folk medicines, Ayurveda, Chinese traditional medicine, and oriental medicine.

I’ll touch on that shortly, but first, we’ll go on to more modern-day benefits of this tea.

Blue lotus tea is believed to have a calming effect on the body and the nervous system. This helps to reduce anxiety and provides a calming effect. Much in the way that chamomile tea also has this effect.

Blue lotus tea has been described as enhancing the following:

Blue lotus tea contains the compounds nuciferine and aporphine. Both of these properties provide antispasmodic effects. These calming effects may also contribute towards a reduction in gastrointestinal issues such as indigestion.

For further help, if you’re looking for a tea to help with gastrointestinal problems, then you can look at my article on teas to combat bloating.

Nuciferine is an alkaline property found in the blue lotus plant. Studies found an increase in dopamine and motor activity. But also found it inhibited dopamine, motor activity, and sensitivity to pain. So research is divided. Anecdotal evidence suggests more of a calming effect than a stimulant.

Aporphine is another alkaloid, some derivatives of which are known to stimulate dopamine, as such it has been used to treat Parkinson’s disease.

Antioxidants and flavonoids fight free radicals in the body

Antioxidants come from fruit, nuts, vegetables, and also from green tea, and other types of tea.

This property promotes good health by fighting free radicals in the body which could damage your body’s cells. Antioxidant intake is associated with a lower risk of chronic conditions like heart disease, obesity, diabetes, and certain types of cancer.

Antioxidants are known to be favorable to the body, but no research or studies have directly linked blue lotus with a reduced risk of any chronic disease.

Following on from the antioxidants, drinking blue lotus tea is seen as a natural moisturizer for the skin. Containing refreshing and nourishing effects for the health of your skin. In some stores, you can see blue lotus flower extract added to moisturizers for this precise effect.

It is believed that blue lotus tea and the plant, in general, can be used to induce lucid dreaming in individuals to enhance their dream state during sleep. Providing a mild sense of tranquillity and euphoria. So hot brewed blue lotus herbal tea is often used as a stress relief remedy.

In fact, you can buy these products off the shelf at Amazon, here’s a selection of blue lotus tea that’s available. It’s also available in vape and vaporizer form.

It has been described as inducing the following:

In ancient societies in areas like India and China, and particularly Egypt in the middle east, blue lotus tea was used as a beverage consumed to induce general euphoria and enhanced hallucinatory effects. In tea form it offers a mild psychoactive effect, inducing a feeling of relaxation and calm happiness.

Used as an aphrodisiac

Throughout history, Blue lotus has been made into a herbal tea for consumption as a natural aphrodisiac. This is certainly the case for ancient Egyptians who saw blue lotus tea as a natural beverage to consume before sex and for ceremonies involving sensuality.

The aporphine property found in lotus tea also has a relative compound of apomorphine. This is not morphine as we usually understand it, but this compound has been used to treat erectile dysfunction with some degree of success.

Historically and traditionally, the plant and the resulting tea made from it have been linked with various benefits to general and specific ailments…

Rhizome extract was used as:

Leaves were used as an effective herbal treatment for:

Flowers were used for treating:

In traditional medicine practice, seeds are used to treat:

In traditional Chinese medicine, the embryo of lotus seeds is often used as Lian Zi Xin. This primarily helps to combat and overcome nervous disorders such as insomnia, and cardiovascular diseases (hypertension and arrhythmia)

Insufficient studies on the side effects of this tea have been carried out. However, we can somewhat rely on anecdotal evidence and should take some sensible precautions.

There are no official side effects from blue lotus herbal tea. But, consuming more than 3 cups per day could lead to increased heart rate and hot flashes. Avoid drinking with painkillers, or other meds, and avoid when pregnant. Not suitable for children and may cause allergies if used on the skin.

It goes without saying, do not take this as official medical advice. This is from research only and you should consult your doctor before taking anything you might think holds a risk of ill effects. Like a lot of things we consume, it’s more about being cautious and taking into account your own personal care.

So now let’s get on to how to make it, then I’ll answer some more questions about this interesting beverage.

How to make blue lotus tea

Like many herbal teas, Blue lotus is pretty easy to steep at home, assuming you’ve purchased the blue lotus tea leaves already. If you’re looking to invoke the aphrodisiac qualities then

In general, blue lotus tea can taste quite sharp in flavor, full-bodied, strong, and earthy. It can also have a floral and aromatic flavor and aroma too. If the taste comes across too bitter for your palette, try a weaker brew. Or try adding a sweetening agent to the drink such as honey.

When should you drink blue lotus tea?

No studies have been conducted on the frequency of drinking blue lotus tea. However, for sleep, it makes sense to consume 1 hour before bed. For use as an aphrodisiac then consume shortly before sex and for general wellbeing, I’d recommend drinking an hour after food, preferably mid-morning.

Regarding the results of taking blue lotus tea. For sleep, you should start to see the effects within an hour. For most other ailments, you should look at taking for 1-2 weeks before seeing more obvious signs of greater wellbeing. However, be sure to consult with your doctor if you’re unsure.

Blue lotus tea is safe. It’s not considered addictive and is not known to cause dependency or serious adverse effects on health. In fact, it’s largely seen as a health-enhancing beverage. If you see desired results on your health and wellbeing you may feel the urge to continue but you can stop.

In most countries, the blue lotus plant can be grown, purchased, and consumed. In the US, it is only illegal in Louisiana. The FDA grades the flower as poisonous but does not classify it as a controlled substance. It is legal in the UK. Poland, Russia, and Latvia classify blue lotus as illegal.

In general, blue lotus tea is not considered a weight loss solution. Although results will vary for each individual. Teas more suitably considered for weight loss would be green tea, Catherine tea, senna tea, and blue ternate tea.

Is there caffeine in lotus tea?

I wrote a complete article discussing the caffeine content in lotus tea. But here’s a recap on that. You can also learn more about caffeine in herbal teas in general

As a herbal tea, blue lotus tea contains zero caffeine. If blended with other true type teas such as green or black tea then it will adopt the caffeine content of those teas. The ratio of blending will also have an impact on the level of caffeine present in the blue tea.

Is Butterfly pea tea the same as Blue Lotus?

As someone who has written extensively about both Blue tea, and in this article on blue lotus tea, I can answer this question very thoroughly.

Butterfly pea tea is different from blue lotus tea. Butterfly Pea tea is from the Clitoria ternate plant, also called butterfly pea or Asian pigeonwings. It has numerous health benefits. Blue lotus tea is derived from the blue lily flower and is used for anxiety, sleep, and as an aphrodisiac.

I hope this has provided you with a complete overview of blue lotus tea. Don’t forget to check out my blue ternate guide too – especially for those seeking weight loss teas.

And if you’re exploring the wonderful world of teas then why stop there? Why not take my fast-track Tea Sommelier course and quickly become the tea connoisseur in your family or circle of friends. Here’s some further information about the course…